Amy Dennis is beaten to death with a hammer in her own home. Her baby is asleep upstairs. A custody battle now rages between Amy’s family and the baby’s father, a married man.

Clara Pascal is struggling to put her life back together after being the victim of a brutal kidnapping. She wants to go back to work, but she’s not ready to return to criminal law. She wants a relationship with her daughter again, but she doesn’t know how. She can’t find a way back into her once-loving marriage. She wants to return to normal. But what is normal?

THE PRIME SUSPECT IS A CONVICTED STALKER
Ian Clemence is fresh out of prison and itching to make up for lost time. But Clara can’t shake the feeling that he’s innocent. Can she find out the dark truth?

‘Murphy tantalizes the reader as she effortlessly weaves the story lines and sustains the tension until the end. Fresh takes on whodunit standards and insight into the minds of the fully realized characters make this an excellent psychological thriller.’
Starred review —Publishers’ Weekly

‘Ms Murphy handles her complex plot with a sure hand and brings it to a stunning climax.’
—Sunday Telegraph

‘In this electrifying sequel to Murphy’s first outing featuring the determined lawyer, Clara Pascal, readers are taken on another turbulent and touching ride through the halls of justice… Murphy supplies the reader with plenty of suspense, red herrings, and just good old fashion great story telling that will enthral and surprise until the final page. One hell of a read, don’t miss this latest, it chills just deeply as it delights.’    — (4 bolts) New Mystery Reader Magazine

‘Murphy is wonderfully adept at analysing not only the mind of the perpetrator but also the victim, as well as dealing with vivid accuracy the flow of revelation in an investigation. Clemence and Clara leap from the page like Hannibal Lecter and Clarice Starling. Weaving Shadows is a gripping, many-layered read.’  —Sherlock

‘As psychologically thrilling as they get . . . a page-turner in every sense of the word.’   —The Irish World, London

‘Can be rated amongst the best of British crime writing and gives the likes of Ian Rankin and Minette Walters a run for their money . . . If you like crime, you’ll love Murphy.’   —Chester Chronicle 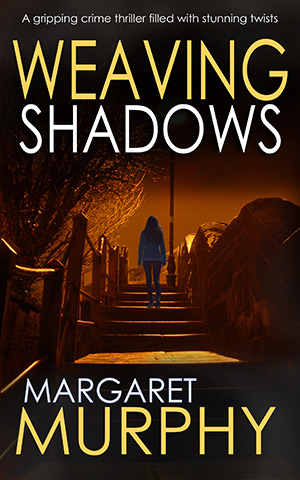